Drug and alcohol abuse in male clients represented 66% of the clients admitted into Eden over a 12 month period. Men are more likely than women to have opportunities to use drugs, but men and women, given an opportunity to use drugs for the first time, are equally likely to do so and to progress from initial use to addiction. 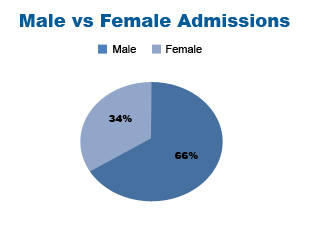 There are also differences between men and women who seek treatment for drug and alcohol abuse. Women in treatment programs are more likely than men to have other health problems, to have sought previous drug treatment, to have attempted suicide, and to have suffered sexual abuse or other physical abuse.

Animal research and human studies have revealed that males and females may differ in their biological responses to drugs. Studies have shown that, given the opportunity to self-administer intravenous doses of cocaine or heroin, females began self-administration sooner than males and administered larger amounts of the drugs.

Women may be more sensitive than men to the cardiovascular effects of cocaine. In human studies, women and men given equal doses of cocaine experienced the same cardiovascular response despite the fact that blood concentrations of cocaine did not rise as high in women as in men.

In studies involving long-term cocaine users, women and men showed similar impairment in tests of concentration, memory, and academic achievement following sustained abstinence, even though women in the study had substantially greater exposure to cocaine. Women cocaine users also were less likely than men to exhibit abnormalities of blood flow in the brain’s frontal lobes. These findings suggest a sex-related mechanism that may protect women from some of the damage cocaine inflicts on the brain.